Sipped slowly, with best friends or family, and after the sunset… Meet Turkish Raki, also known as the “Lion’s Milk” -unofficial, but by heart, the national drink of Turkey- is a centuries-old alcoholic beverage that has its own unique etiquettes and culture.

While beer consumption increased to 57% in recent years, this spirit of sharing remains still a serious ritual and maybe, making it even more valuable over time, as it is not something you can drink with anyone and anytime.

Read on to learn more about the culture and etiquette of Turkey’s national drink.

The Name and The History of Raki

Also known as the “lion’s milk” today, the definition Raki (pronunciation: ra-kee) was originated from a Middle Eastern definition of “Araki” or “Ariki,” which was called “Arak” during the Ottoman era.

As the word “Razzaki” sounds similar to “Raki” and its being a Turkish drink, the name might originate from the grape type.

Some believe that since it was produced by the Turkmen Turks living in Iraq and distributed to the neighboring countries, the name was derived from “Iraqi: came from Iraq.” This one is not supported by most experts as there was no government named Iraq when the definition “Arak” was already used in 16th-century during the Ottoman era.

“Arika”: a traditional drink of the nomadic Turks in Central Asia that is distilled from mares milk; also is an alcoholic beverage that was the most similar to the Raki.

Finally, according to some researchers, “arak” means “water sweat drop or distilled,” and the name was originated from this term.

It is admitted by the majority of the world that Raki was invented within the borders of the Ottoman Empire.

What is with the name “Lion’s Milk”?

One of the most beautiful places to drink this lion milk was a tavern at Bornova Street in Izmir run by the Anastapoulos brothers. The old barrels of this family brand emblem had a lion, and the locals in Izmir call Raki the “Lion’s Milk” since those days.

While most of these nostalgic taverns don’t exist in Izmir anymore, there are still some of them that you can enjoy a session with delicious olive oil dishes, cheese, and fresh fish. 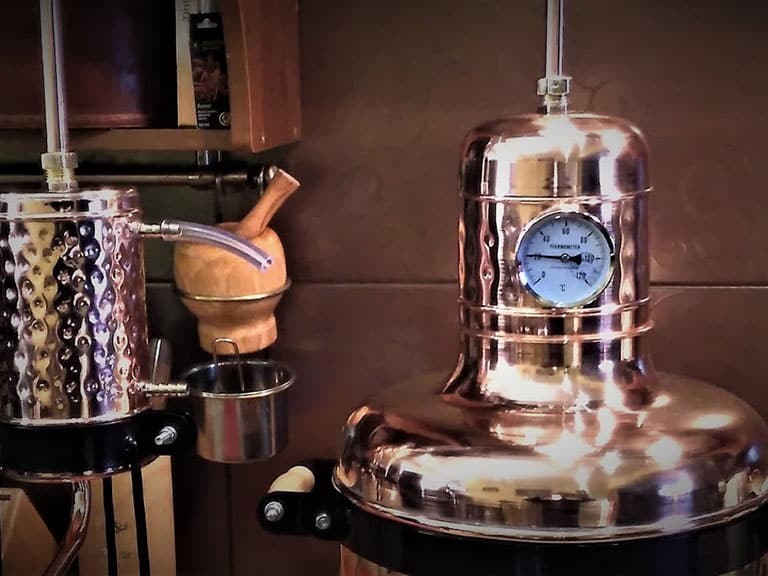 How is Turkish Raki Made?

Raki is made of dried and fresh grape spirit flavored with aniseeds after a second or third distillation, the addition of sugar, and then finally, aging is done in oak barrels, which takes around 2 to 6 months.

The first distillation is made with suma mixed with 80% ethyl alcohol, followed by anise during the second distillation. During this process, red copper distillers are used (usually with a capacity of 5000 liters) where it is then separated into 3 different sections as top, belly, and bottom (referring to the layers of the distiller).

After the aging process, it is bottled, labeled, and then distributed all around the country to bring celebration, happiness, and great conversations that will help you slow down, watch and appreciate life.

Some Other Facts About the Raki

How to Drink The Lion’s Milk a Turk

The most important key to befit its dignity is to have it cooled, pour some cold water, and then a single cube piece of ice. If you add mild or warm water, it will not taste good, and you will agree with this once you know the difference.

If you add the ice before the water, the aroma will crystalize, and it will taste bad. You will drop it after the very first sip.

All in all, it should be drunk slowly, with little sips, and to make a difference, during the first sip, you can take a short breath between the teeth to let the lungs also benefit the festive.

Since it is simply a mixture of alcohol, aniseed, and sugar, it will taste more like liquors, but if you have good mezes and fish, look no further. If you can’t bear the taste of aniseeds, you can also try the carrot juice known as “salgam” served aside in a separate glass.

If you are planning to prepare a “raki table” for dining at home, make sure to equip the table similar to what you have at a tavern (meyhane). Decide on the main course and prepare enough portions of it as most, you will already feel full with the mezes on the table.

Drink it only with people you have good conversations with, who are tolerant, know how to listen, and someone you enjoy having a conversation with, and that you have the tolerance for listening.

Keep in mind, the purpose of that table is to enjoy the spirit of sharing with our loved ones, to have fun and laughter with them. So, don’t let it make you feel tired, get you drunk or away from the table, but follow its tradition that strengthens the bonds between husband and wife or between family members.

If you are not used to it, it will take you only 2 or 3 double shots to get drunk. If you are good at drinking, you can challenge another double, but drink it slowly, and you will know how it goes. Our recommendation is a 20 cl or 35 cl for 2, and if a party of 4 or more, then go for a 70 cl.

In short, it is not drunk to get drunk. It is rather drunk at family gatherings, hospitality when you get together with best friends to celebrate something. 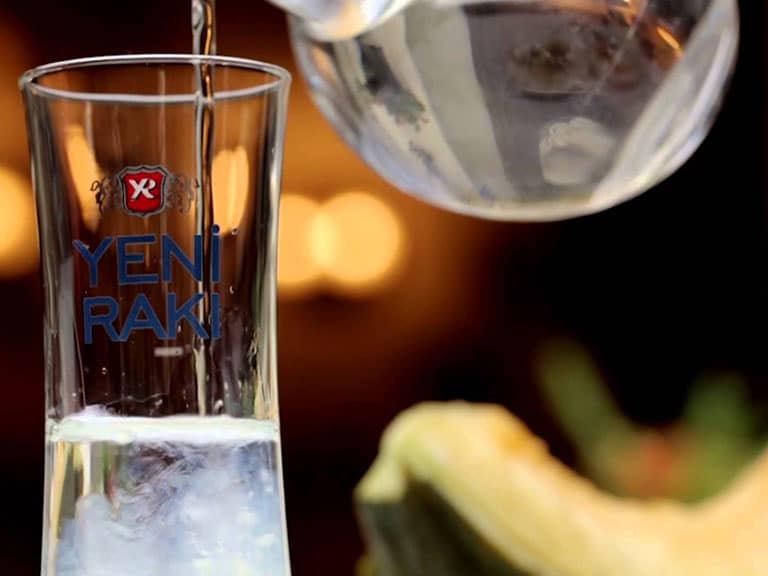 The Best Time to Drink Raki

As many poets suggest, the best time for “Raki o’clock” is slightly after the beginning of sunset. The idea with this to ease the pain of the day, relax and get away from the hustle and bustle of daily life. Additionally, when it is dark, you see what you would like to see, concentrate on the things you want to see, and listen to your heart better.

While drinking, the seasons also have different effects on people. For example, while listening to the sound of the water by the river on a spring evening… Listening to the sound of the rain tapping the roof in winter… When we get together with our friends on a hot summer evening, while watching the leaves falling on a windy autumn day, it always leaves different flavors on our palate. 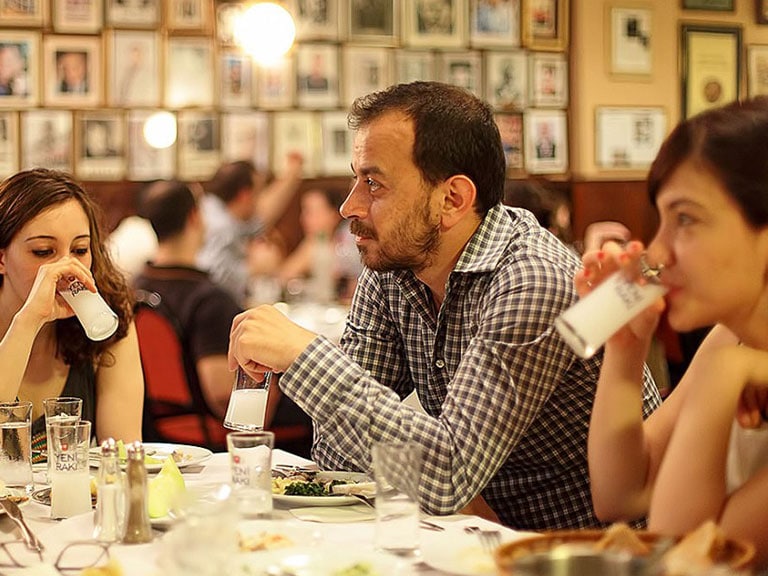 The tavern (Turkish: meyhane) specifically serves for the Raki culture. While you can enjoy this traditional ritual with your best friend or soul mate, you can go ahead and book a table for 4 as well.

Most bespoke restaurants serve delicious mezes as well. Yet, if it is not known for this ritual specifically, either the music or the overall atmosphere will not match what you can experience at a nostalgic tavern.

If this a birthday party and you have many people in the group, a restaurant venue might work better. The restaurant or a similar venue can have louder music and some traditional music such as “fasil” and some places include a belly dancer, too.

But, if this is all about pouring out your grief to your best friend, a traditional tavern will be the best match where there is soft music in the background with fewer crowds. Additionally, if you are not hungry enough, a meze plate of watermelon and cheese will be an ideal choice. 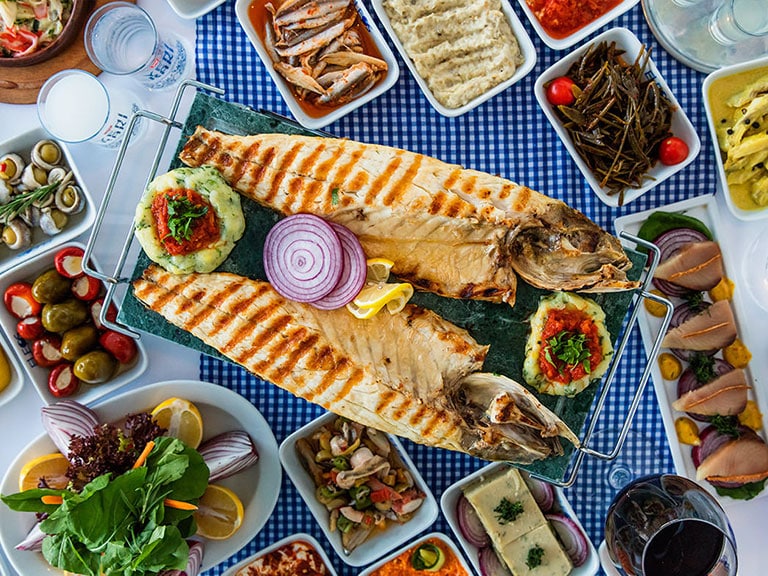 What Are the Best Mezes for Raki

Almost any olive oil dishes will be perfect. To name a few of the most preferred mezes of all: they are haydari, smoked eggplant salad, tarator, spicy ezme, saksuka (a type of stew), fava, hummus, muhammara, shrimps, calamari, lakerda, babagannus (baba ghanouj), borulce and rocket salad.

What Are the Best Brands

While there were more than 48 producers in 1938 alone, most of those disappeared after 1944 when a law granted the right to produce and sell Raki only to Tekel. Today, 4 major producers are Mey, Elda, Burgaz, and Taris-Tat, with more than 20 brands. Yeni Raki, Tekirdag Altin Seri, Altinbas, Efe Yas Uzum, Sari Zeybek, and Kulup Rakisi are among the most preferred labels.

Experience Turkish Raki for Yourself

When it is time to experience this culture and join the spirit of share, don’t forget to clink the bottoms of your glasses when toasting and say “Serefe”!