Best Known for
The city plan

The ancient city of Priene sits dramatically on the slopes of Mykale mountain, 30 km south of Kusadasi and 35 km south of Ephesus.

Nestled security on a flat table of land, its ruins overlook the flood plain of the Meander River, silently whispering their rich history to the fertile lands below.

Priene was a prosperous city in its prime and a thriving center of trade, religion, art, and education in the Archaic times.

Although it has inevitably crumbled under the weight of time, the site is still worth visiting as it’s arguably the best-preserved classical Greek city in the world.

Planning a trip to Priene soon? Answer this trip planner and get your FREE quotation within 24 hours.

The ancient city of Priene sits dramatically on the slopes of Mykale mountain, 30 km south of Kusadasi and 35 km south of Ephesus.

Nestled security on a flat table of land, its ruins overlook the flood plain of the Meander River, silently whispering their rich history to the fertile lands below.

Priene was a prosperous city in its prime and a thriving center of trade, religion, art, and education in the Archaic times.

Although it has inevitably crumbled under the weight of time, the site is still worth visiting as it’s arguably the best-preserved classical Greek city in the world.

Planning a trip to Priene soon? Answer this trip planner and get your FREE quotation within 24 hours.

Priene appears in its present location in the 4th century BCE. However, evidence suggests that the city was initially situated in a different area closer to the shores of the Aegean sea. Residents of the original town were forced to move when sedimentation caused by the Meander River cut them off from the sea.

Overall though, the Greek Colonist first arrived in the area around 1000 BCE, where they founded the settlement near ancient Aneon (the modern-day town of Soke). Over the next seven centuries, the city was relocated twice- first in 700 BCE and later to its current location in the 4th century BCE.

The city prospered under Greek colonization and became a key member of the Ionian League. At its peak, it hosted important meetings in the Panionion and minted coins from electrum, an alloy of gold and silver. These coins featured the face of Athena and date back to the 6th century BCE, serving as the last surviving relics from the city’s peak.

In the 5th century BCE, Priene took part in a failed revolt against the Persians, which brought it under their dominion. As a result, Mausolus of Halicarnassus was appointed as the city’s satrap and the rest of the region (Caria). Under him, the town enjoyed some considerable success.

Soon, the satrap was joined by Alexander the Great, who helped liberate Priene from the Persians. It continued to prosper under their partnership but couldn’t quite regain the same level of political influence enjoyed during the Archaic. This was also the period that the city moved to its current location.

From the 3rd to the 2nd century BCE, Priene was an economic and cultural giant with its school of sculpture. It slowly faded under the Pergamon Kings, Romans, and the Byzantines until it was finally abandoned in the 13th century.

Priene’s most defining feature is its Greek-style city plan- a well-thought-out urban design with all its structures contained within clearly defined city boundaries.

The most recognizable feature of the city’s Greek-style plan is the street grid, which follows secondary streets meeting primary ones at a right angle, forming a perfectly rectangular grid. These streets are well-plastered to hide a system of clay pipes that supplied water to fountains and some private homes in the city. There was also a network of drains used to evacuate runoff rainwater.

Residential houses in the city were constructed from small stones and sun-dried bricks. As a result, they are relatively well preserved to date and are often compared to those of Pompeii and the island of Delos in their size and beauty.

One of the most important ruins is the Temple of Athena Polias, built in 335 BCE using funds provided by Alexander the Great and overseen by the famous architect Pyteos. It was designed in the hexastyle with six by eleven columns.

The city’s center was home to a 3rd-century BCE Agora which was later surrounded by impressive structures, including the Stoa. To the east of the agora was the quarter of Priene devoted to Zeus Olympios.

Further east was a small section where the Egyptian gods were worshipped. In contrast, the northeastern and northwest areas of the city featured a theater and cult temple(the house of Alexander) dedicated to Alexander the Great. There was also one gymnasium in the southern part of the city and another one in the upper(northern) section.

In the late 18th, the Society of Dilettanti from London became interested in the ancient city of Priene. Thus, they sent their first expedition searching for the ruins in 1765 and another almost 100 years later in 1868.

However, the privilege of conducting the first extensive excavations went to the Germans. Between 1895 and 1898, German Scholars Carl Humann and Theodor Wiegand from the Museum of Berlin led a team of archeologists that managed to uncover the whole area. These included the temples, public buildings, houses, and city gates.

Subsequent excavations over the years have helped uncover more buildings in Priene. The most recent discovery was a 1600-year old Byzantine church unearthed in October 2021. 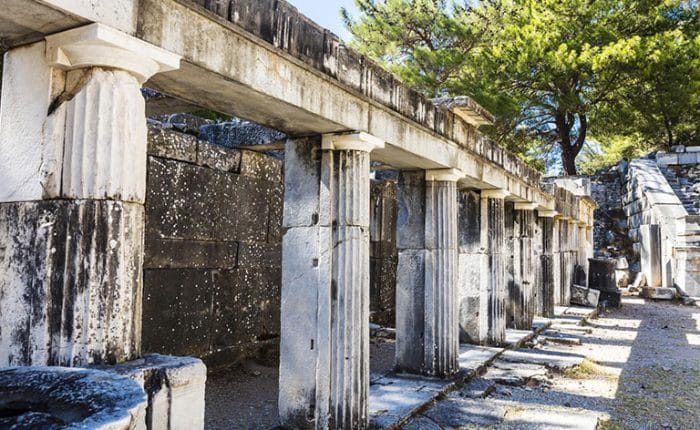 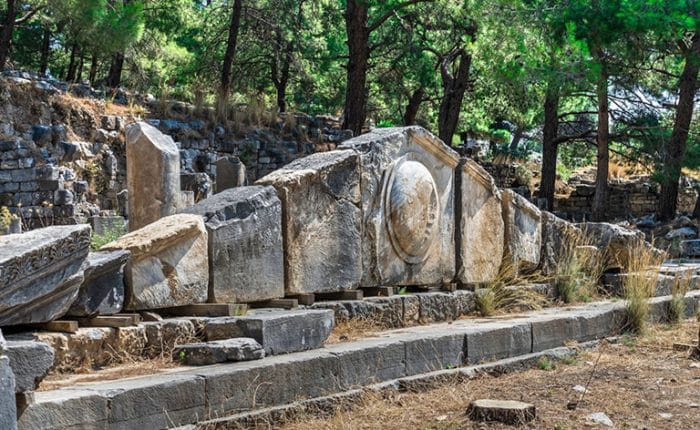 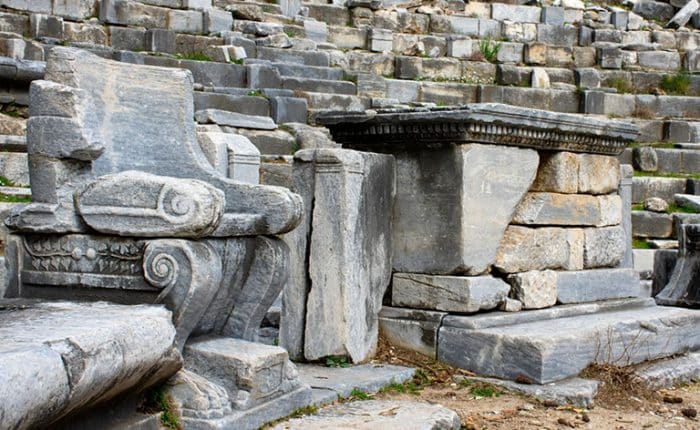 Before getting to the city, you must appreciate its memorable setting and breathtaking natural scenery. It sits on a forested slope facing the valley of the Meander River against the backdrop of the majestic Mykale Mountain.

Fortunately, this area doesn’t receive as many visitors as Miletus and Ephesus nearby. So, you won’t have to worry about crowds when exploring.

Priene’s main street runs from east to west, with smaller streets crossing it at a right angle. These secondary streets lead up and down the slope and could be accessed the four terraces on which the city is located.

The first thing you’ll notice about Priene is its incredible state of preservation. Combine these with the impressive natural setting, and you have one of the most spectacular sites of any ancient ruins.

The lowest terrace is home to the city’s stadium and lower gymnasium. As you ascend the streets to the upper terraces, you’ll pass through the agora, the temple of Zeus, and the all too famous Athena Polias. You’ll also glimpse the upper gymnasium and spend some time in an impressive 2300-year old theater of Greek and Roman architecture.

The highest terrace is home to the sanctuary of Demeter, and high up the mountain to the north of the city lies the acropolis.

You can visit the ancient trio of Priene, Miletus, and Didyma all in one day. Other nearby attractions include the Ephesus, Pergamon, Bodrum, and Marmaris. 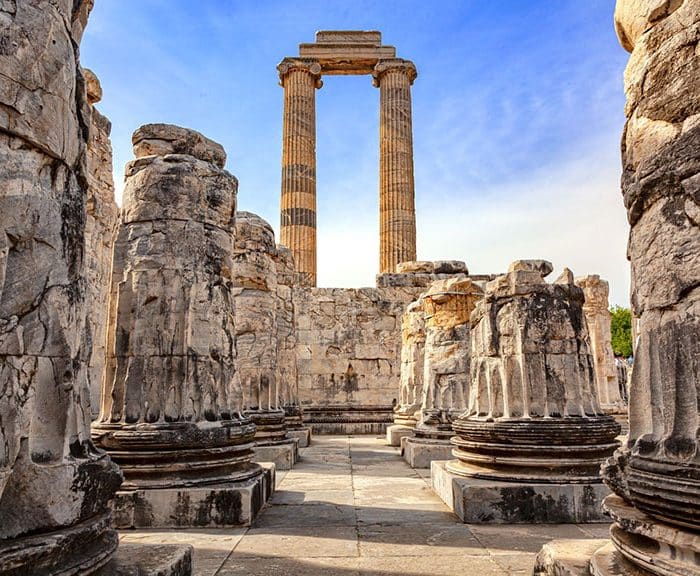 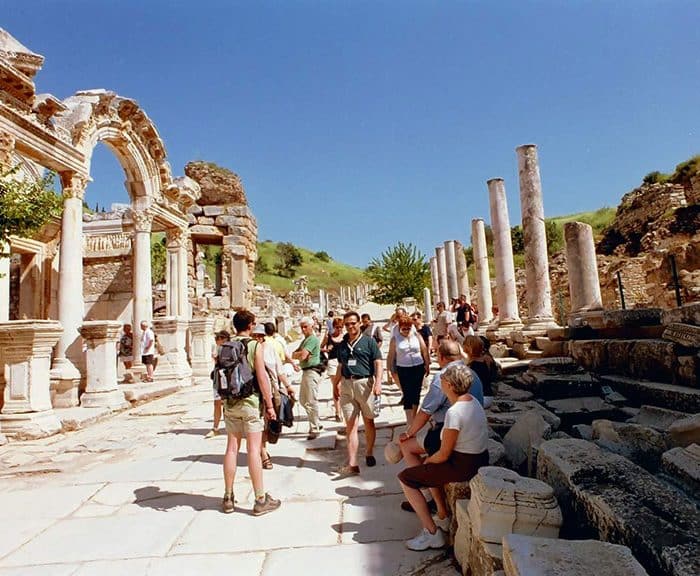 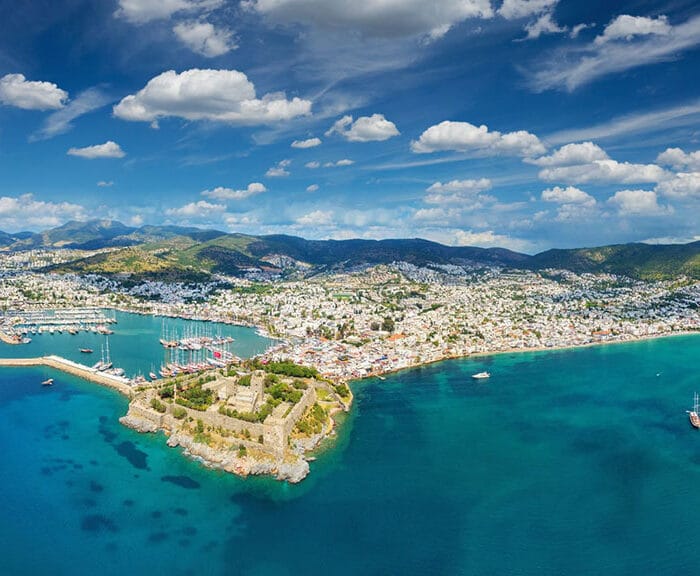 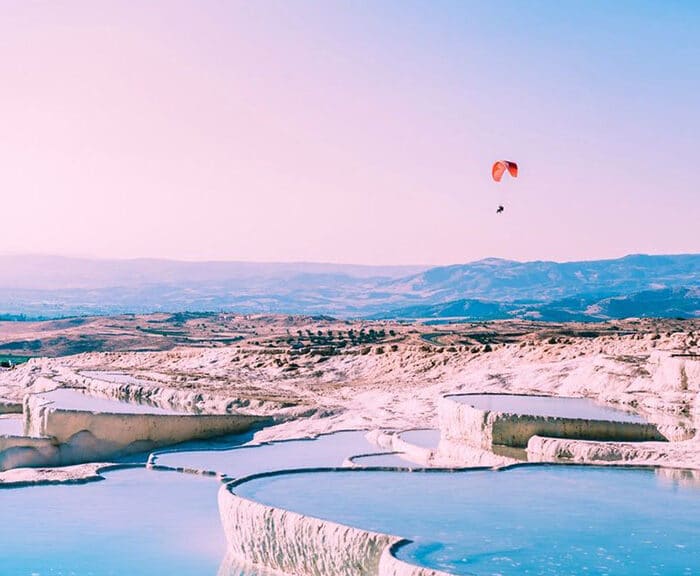 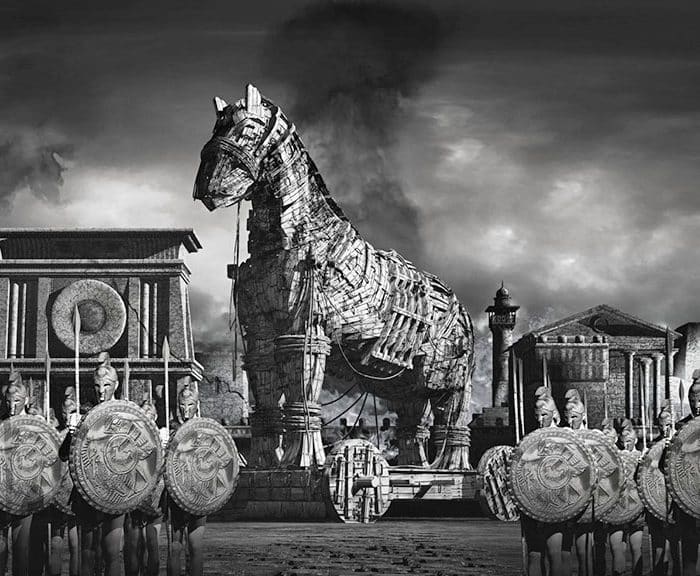