Turkey has a rich culture with lots of exciting traditions that tourists visiting the country love to experience. One of the most beloved Turkish traditions by both visitors and locals is the hammam or Turkish bath. If you plan to visit the country for the first time, this is an activity that will be recommended to you by almost every travel guide or magazine you read; and rightly so.

Here is a guide on the hammam, including the dos and don’ts of the country’s bath culture and some of the best hammams in Istanbul.

What is a Hammam

A hammam is a Turkish version of the steam bath and was traditionally a place of public bathing. It is a profoundly relaxing treatment that uses hot steam to give your skin a deep cleanse. Special soaps are also used to encourage exfoliation and skin regeneration.

The History of Turkish Bathing

In ancient times, steam baths were an integral part of the Roman empire, which spanned into Turkey as the Eastern Roman Empire. Therefore, it was widely practiced by the Romans and later the Byzantine occupiers of the country.

When the Turks arrived in Anatolia, they brought their own bathing tradition but were also exposed to the existing ones left behind by the Romans. Over time, the two traditions merged, and the result was the Turkish bath. The widespread adoption of the new bath culture was also helped by the fact that the Ottoman Empire was mainly Islam, and cleanliness and respect for water use is an integral part of the religion. Many mosques from the Ottoman era even have a hammam built next to them.

There were some distinct differences between the Roman sauna and the Turkish way of doing things. The first and most significant being that while steam baths were mostly reserved for the elite in the Roman and Byzantine empires, the Turkish bath was open to all classes. In the hammams, neither rank nor age mattered; the young and the old, whether rich or poor, all had access to Turkish baths. To create some separation, hammams that admitted both men and women allowed access to the sexes at separate hours.

Apart from cleanliness, the hammam was also of great cultural significance to the ancient Turks. Certain cultural practices revolved around the Turkish bath. These practices included Hospitality bathing. One would take their guest to the hammam and bathing to mark special occasions like circumcision, getting drafted into the army, and becoming a groom.

Brides bathing was also a special practice in the hammam, and infants would be washed in the bath on their fortieth day. Another cultural practice was Anatolia’s avowal, where one would make a promise, and in celebration of the vow, they arranged and paid for a ceremonial bath in the hammam. The festival was open to everyone. 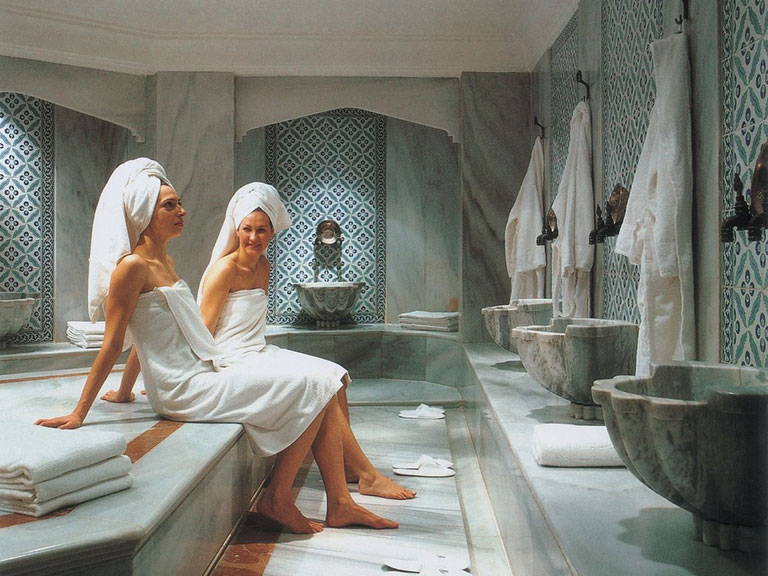 Things to Know Before Getting Inside a Hammam

Unlike your hotel bathroom, which is private, a hammam is open to the public, and therefore, there is much to know to avoid getting caught out.

First off is that in most traditional Turkish baths, male and female sections are separated. Therefore, if you will be in the company of a friend or significant other of the opposite sex, you won’t take a bath together. Regardless of where each of you goes, your experiences will more or less the same as the bathing rituals are similar regardless of sex. If taking a relaxing bath together is of great importance, you will be glad to know that there are modern hammams that offer services to couples. 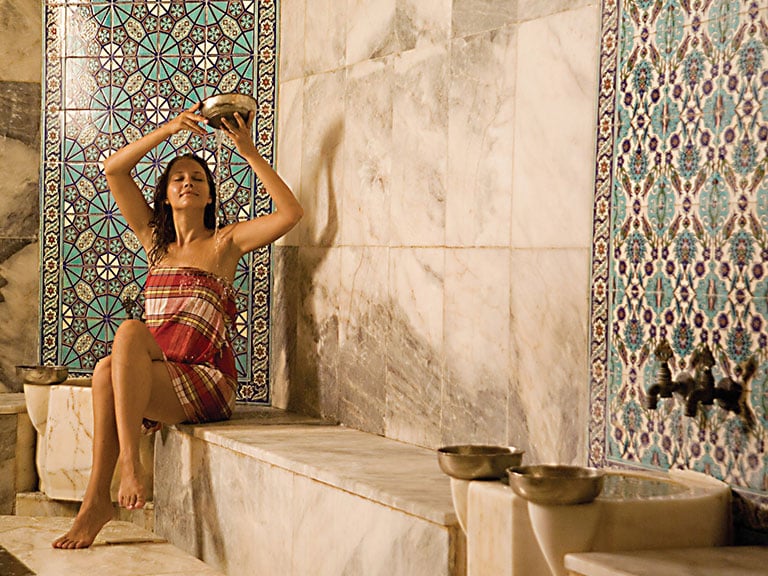 What you need to wear

You won’t be wearing much during your hammam session; men only wear a light towel (pestemal), tied around their waist to cover the groin area. On the other hand, women wear the pestemal and can keep their bras on, although most women take off their bras to allow for a complete hammam experience.

An important thing to note is that the pestemal has to be on at all times as flashing while in the Turkish bath is frowned upon. Also, put on rubber flip-flops at all times if you don’t want to slip and fall. This is because the floor of a hammam is usually wet and slippery.

There are three ways that you can enjoy a Turkish bath:

In a Turkish bath, it is common practice to tip the attendant. You can’t really avoid this, and tips are normally around 15% of the total cost. Therefore, make sure you have some cash in the local currency as you visit the hammam.

How long will the whole experience last?

The whole process from start to finish takes around an hour, but the massage and scrubbing will take 15 minutes. Don’t worry though, as once you have paid the entrance and service fee, you can stay in most hammams for as long as you want. If you are in a popular and busy hammam, this may not be the case, but it won’t hurt to ask for a bit more time if you want to stay a little longer. 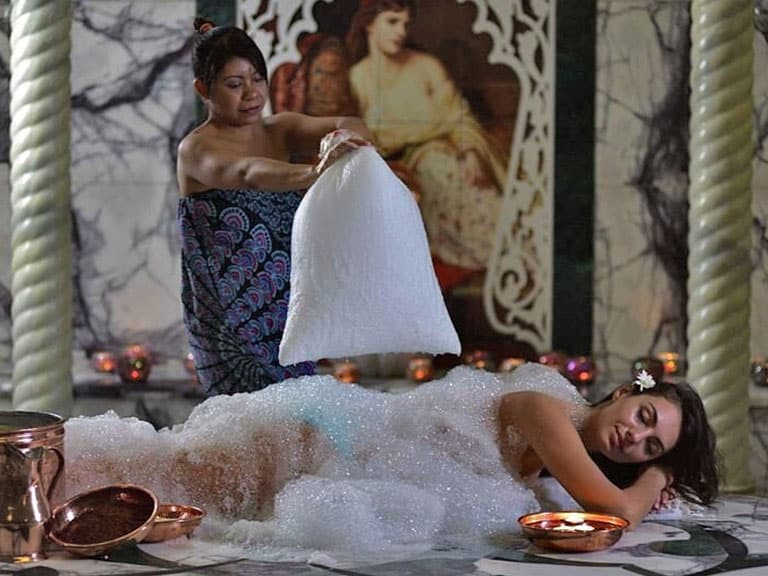 Once you are inside, your Turkish bath experience begins. If you have chosen the traditional Turkish bath, your attendant will first lead you to the warm room. This is a small room with a small marble basin (kurna) for dry heating. For around 10-15 minutes, your body will soak up the heat and sweat, which is essential as it readies your skin for the next process; scrubbing.

Your attendant will soak you up with warm water and then lather you with soap and scrub you with exfoliant paste. The attendants make sure to use gentle and painless exfoliants like gommage or savon beldi, but expect to be scrubbed quite vigorously during your quest for exfoliation. If you feel the attendant is a bit too hard on your skin, you can always ask them to be a bit gentler. Don’t be embarrassed if you see the dirt coming off your skin despite showering before heading to the hammam; it is just dead skin layers coming off.

After the Turkish scrub, your attendant will give you another soapy wash in bubbles (kopuk) and rinse you with cold water. The procedure uses a special lathered clothe to squeeze bubbles all over your body as they give you a gentle massage. Some Turkish baths also do a quick hair wash after they have taken care of the body.

Once the hour-long experience is complete, you have the option to leave the hammam or stay and continue with your relaxation in the bath. Most establishments give their customers some tea or a cup of cold fruit juice (Serbet) to help return the body to its average temperature. Others let you sit in the lounge and read books, magazines or chat with other people in the lounge. 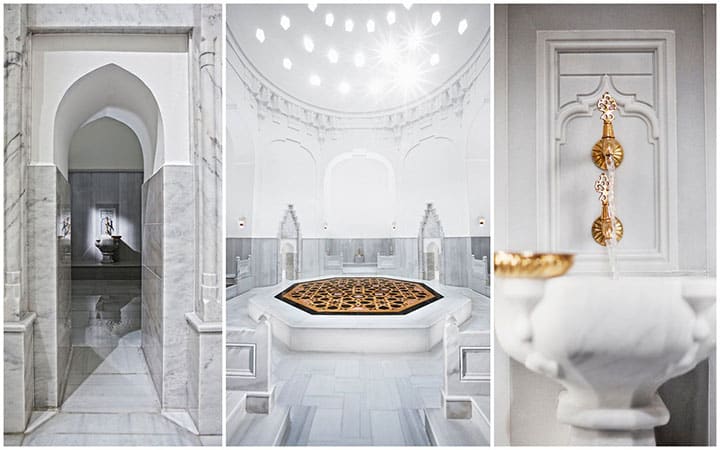 Top 5 of Best Hammams in Istanbul

For those looking to enjoy a relaxing Turkish bath experience during their tour, Istanbul has many hammams to offer. Here are 5 of the best:

This hammam was commissioned in the mid-16th century by Sultan Suleiman the Magnificent as a gift to his daughter Mihrimah. Two facilities were built by the talented Ottoman architect Sinan (also responsible for building most other top hammams), one in Uskudar and the other in Edirkenekapi.

The hammam has a square-shaped Camekan (Changing area), which is constructed upon twelve columns. There is also a huge dome with four luxurious private rooms and a central heating stone. A hot tub and a large pool have been added to the Mihrimah Sultan Hamam in recent times, much to historians’ dissatisfaction.

Roxelana, Suleiman’s wife, commissioned the Haseki. This magnificent Turkish bath is also the work of the architect Sinan and is housed in the equally magnificent Hagia Sophia, where it sits where the Temple of Zeus once stood. After the Ottoman Empire’s fall, it fell into decay and was used as a prison, paper and oil store, and a famous carpet market. It was restored to its former marble glory between 2008 and 2011, making it the fanciest in Istanbul.

Featuring breathtaking design elements of glass elephant eyes, marble slabs, leaded domes, a Kulhan chimney, and stone carvings, this hammam is another impressive work of Sinan. With a height of 51 feet and a width of 45 feet, it is the biggest bath built by the architect. It was named after a slave who traveled to Constantinople and became a mighty 16th-century admiral. The Kilic Ali Pasha Hamam underwent a seven-year renovation to restore its original beauty.

This hammam was commissioned by Sultan Abdulhamid I in the late 19th century next to the Beylerbeyi mosque. It was dedicated to the Sultan’s mother, Rabia Sermi Kadin. The Hammam has a magnificent fountain in the cooling area, and the Camekan has an impressive wooden ceiling. Other features in the Hammam include a hot stone, 13 kurnas (fountains), four private rooms, and a hot stone.

The Hammam admits women in the morning and men in the afternoon.

A legend goes that the Sultan Bayezid commissioned the Galatasaray Hamam in the 15th century after he came across Gul Baba (Father of Roses), a celebrated poet and exalted Muslim dervish. Gul Baba told the Sultan his wishes (a mosque and kulliye), who in turn vowed to fulfill them. A kulliye is a building with a Hammam, and other facilities build adjacent to a mosque.

When the Sultan returned, he ordered the construction of the Galatasaray. The cooling-off area has large marble slabs, and the steam rooms here are very hot. It is a local favorite.