With so many enticing sites in Istanbul, tourists so often leave without exploring some breathtakingly amazing attractions in the city. Excellent examples of such forgotten treasures are probably two of the most stunning neighborhoods in any Turkish city; Fener and Balat. These two neighborhoods sit next to each other on the western bank of the Golden Horn and were once home to the Greek and Jewish populations of Istanbul.

Today, they are of such historical and aesthetic significance to the city that they have been listed by UNESCO as world heritage sites. Nonetheless, few tourists get to wander the cobbled streets of Fener and Balat that rise and fall like little hills. A lot miss out on the charming atmosphere created by the colored walls of the neighborhoods’ beautiful old stone houses and churches.

If you want to get lost in these historical streets, here is Made in Turkey’s comprehensive guide to visiting Fener and Balat. For a well-planned and executed tour of the neighborhoods and any of Istanbul’s other attractions, contact us today.

History of Fener and Balat

The history of the two neighborhoods goes back over six centuries ago after the Ottoman occupation of Istanbul.

In the Byzantine period, the medieval Greeks called the neighborhood “fanarion,” meaning a streetlight, lighting lantern, or a light post with a light lantern. The name came from a Byzantine column topped with a lantern and used as a public light or marine locator/beacon. Fener, the current name of the neighborhood, comes from a Turkish iteration of “fanarion.”

When Constantinople fell to the Turks in 1453, most of the Greek population moved into the Fener district. In the 17th century, the neighborhood became the seat of the Ecumenical Patriarchate of Constantinople (spiritual leader of the Eastern Orthodox Christians), also known as the Phanari in short.

The Ottomans, therefore, referred to the Greek inhabitants of Fener as Phanariotes. Between the early 17th and 18th centuries, some of the Phanariotes served the Sultan in various capacities. The wealthy ones even landed offices as governors over Ottoman provinces in Greece and Turkish European and hospodars (lords or masters) in Wallachia and Moldavia.

With the fall of the Ottoman Empire and the rise of the republic, the Greek population got evicted from the neighborhood. As a result, Fener almost fell into ruin but was rescued when Turks from the Black Sea’s rural regions settled here, transforming the area and helping preserve the beautiful houses.

Balat is derived from the Greek word palation (palace), after the neighboring palace of Blachernae. It started its development after 1492 when the Sultan sent his fleet to Spain to rescue Jews targeted by the Spanish Inquisition. These Jews were welcomed to Constantinople, where they flourished in the Balat district. The district also formed a passage for Jewish newcomers, becoming the largest neighborhood of the Sephardic Jewish community in Constantinople. Jews who succeeded moved to other districts like Galata.

Just like with Fener, the Balat district was depopulated after the fall of the Ottoman Empire. The creation of the Israeli state and industrialization of the Golden horn also played significant roles in the decline. To prevent the neighborhood from falling into complete ruin, Balat was also repopulated by Turkish migrants from the Black Sea region.

What Places to Visit in Fener and Balat

The Jewish and Greek inhabitants of the two districts left lots of exciting attractions in their wake. Today, these attractions tell the story of Istanbul’s important history with foreign settlers to the many tourists that flock to them while exploring these charming streets. These are: 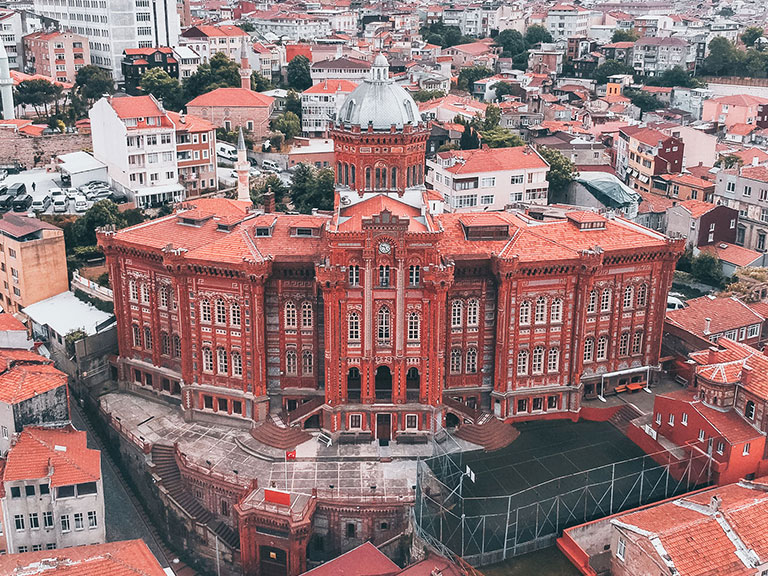 With an unmissable red silhouette and magnificent architecture, the Fener Greek Highschool is one of the most iconic structures in Fener. Also known as Phanar Greek Orthodox College or Phanar Roman Orthodox Lyceum, the school is the oldest surviving Greek Orthodox school in the city. It stands out in the district and, at first glance, looks like a giant red castle.

The college was established in 1454 by the Patriarch Gennadius Scholarius, but the existing building was constructed between 1881 and 1883. It boasts an eclectic mix of architectural designs, with building materials imported from France and a castle-like shape.

Therefore, it is sometimes called “the 5th largest castle in Europe.”

In Ottoman times, it was a school of the Phanariotes, Orthodox families, Wallachian and Moldavian princes, and many Ottoman ministers in the empire. Today, the school applies the full Turkish curriculum required by the law, although it teaches Greek literature, language, and religion. When not imparting knowledge to young minds of the neighborhood, the school is a favorite photo spot among visitors of the area.

The Fener Greek Patriarchate & the Church of St. George

Since the 17th century, the Church of St. George has been the seat of Ecumenical Patriarchate Constantinople, the senior patriarchate of the Eastern Orthodox Church who serves as the spiritual leader of the 300 million Orthodox Christians globally. The church is, therefore, a popular pilgrimage site for Orthodox Christians, mainly from Greece.

After its completion, the church was dedicated to Saint George. It survived a couple of great fires over the years, one in the early 17th century and another in 1738 and 1941. It has therefore been reconstructed so much that today, not much remains of its original structure. In 1997, the church suffered a bomb blast in a terrorist attack aimed at the Ecumenical Patriarchate.

Today, the Church of St. George is one of the most visited locations by tourists in Fener. Visitors are drawn by the building’s rich history of resilience amongst a breathtaking interior and valuable objects like a 5th-century patriarchal throne, relics of Saints Gregory and John Chrysostom, and some rare mosaics.

Istanbul is home to some stunning houses of worship, and one of the most beautiful churches in the city sits right next to the Golden Horn in Fener. The richly ornamented church was constructed sometime in the 19th century by Bulgarians living in the Ottoman Empire, starting as a simple wooden building. Nonetheless, a fire destroyed the original structure, and, in its place, the most stunning of churches emerged.

In the late 19th century, the St. Stephen church was reconstructed in a neo-Gothic style using prefabricated cast-iron elements and then decorated with rich ornaments. Its prefabricated parts were produced in Vienna and transported to Istanbul via the Danube and the Black sea, where the church was completed in 1898. With a steel skeleton, it is one of the last surviving prefabricated churches in the world.

On St. Stephens’s feast day in December 2010, the church’s dome was gold-plated in honor of its patron saint. Today, it stands as another beautiful sight in the pretty neighborhood of Fener and is a must-see for anyone touring the area.

Church of Our Lady of the Mongols (Bloody Church)

Known in Turkish as Kanli Kilise, the Church of Our Lady of the Mongols is the only Byzantine-era church in Constantinople that wasn’t converted into a mosque by the Ottomans. This was due to a grant by Mehmed II to the mother of the Greek architect Christodoulos that allowed the church to be used by the Greek Orthodox population. It was constructed in the 13th century but was damaged a couple of times, losing its elegance.

Although the church is painted red, that’s not how it got its nickname. During the fall of Constantinople, the Greeks’ last futile resistance against the Ottomans unfolded around the building, giving it the Turkish name Kanli Kilise (Church of Blood).

The Kariye Mosque, also known as the Church of the Holy Saviour in Chora, is a medieval Greek Orthodox church in Istanbul’s Edirnekapi neighborhood that is now used as a mosque. The neighborhood is located in the western part of the Fatih district.

The Ahrida Synagogue in Balat is one of the oldest in Turkey. It was constructed in the 15th century by Macedonian Jews (Romaniotes) and named after the city of Ohrid, from which they migrated. It is one of two old synagogues on the Golden Horn and charms its visitors with its Baroque-style architecture. Some of the structure’s top attractions include the boat-shaped reading platform and the Holy chest covered with fine tapestries.

If you are up for some shopping, there is a bazaar on Leblebiciler Street that sells authentic products. The market takes its name from the Jewish traders that once operated in the area and has various antique and vintage shops that you should try. The same street houses the famous Agora Tavern and the Yanbol Synagogue.

The Colorful Houses of Fener and Balat

While the two neighborhoods might have several beautiful places to visit and explore, their biggest attraction is arguably the multicolored buildings that line either side of the streets. These are easily the most stunning streets in Turkey, and for the most part, visitors love trekking the cobblestone streets and taking pictures among the neighborhood’s cute houses.

From pink, orange, blue, red, and even grey, the houses create a spectacular blend of colors loved by locals and tourists alike. Taking photos in these streets is something you wouldn’t want to miss for anything. One of the best places to do so is the Corbaci Cesmesi ramp (Merdivenli ramp) in the Balat neighborhood. The restored area is a trendy photo spot in the community.

There are many places to eat as much as there are places to visit and things to do in Fener and Balat. Since exploring the two neighborhoods may take half a day or so, don’t forget to treat yourself to some delicious local dishes while at it. The cafes and restaurants are just as colorful, authentic, and lively as the streets around them, and the food is mouthwatering.

Some popular venues to eat at while in the area include Perispri, the Forno, Kofteci Arnavut, Balat Sahil restaurant, and the Agora Tavern, among many others.

Guided tours are the best way to explore these historical and idyllic locations in Istanbul; you get to explore the best locations in detail without getting lost or scammed. Therefore, book a top-rated guided tour of the Fener & Balat districts with us today and experience one of the city’s most scenic treks.