When you book with an account, you will be able to track your payment status, track the confirmation and you can also rate the tour after you finished the tour.
Sign Up
15

We agree that you can’t get enough of it, but if you are looking for a couple of days outside of Istanbul, then this 2 days Cappadocia tour package might be the best option. Easily connected with direct flights throughout the day, Cappadocia is a great choice, and it will help you catch a breath with its quiet atmosphere, clean air, and noise-free environs.

Simply a nicely blended experience! Accompanied by one of our expert guides, we will take you all the highlights plus some of the off-the-beaten visits. Staying at one of the best cave hotels with excellent service and breakfast service, you will wake up to nothing but peace.

Day 1Private Transfer to Airport for Direct Flight to Cappadocia

Before or after breakfast in the morning (we will share the options to confirm the preferred time), get picked up from your hotel in Istanbul and transfer to Istanbul (IST) or Sabiha (SAW) Airport. After an hour and a 15 minutes flight, you will arrive at Kayseri (ASR) or Nevsehir (NAV) Airport. Meeting your guide upon arrival, re-plan (if desired) the itinerary over the map, sit back, relax, and enjoy these two days in Cappadocia after all the sweet rush of Istanbul.

The highlights of the day include visits to Goreme Open Air Museum, where you will see some fantastic cave churches dated back to the 10th-11th centuries and registered to UNESCO World Heritage Site List.

Since Goreme is a touristy town, there are not many “non-touristy” food options. Let us take you to one of our favorites to enjoy some of the local delicacies of Anatolian cuisine.

After lunch, head to Pasabag (Hermits’ Valley), where you can walk the lunch off wandering around the giant fairy chimneys, learn how they were formed while taking some beautiful photos. These wondrous rock formations are unique to this region, not only with the geographical process that followed very strictly but also with its historical background.

You can’t get enough of the wonders that Cappadocia has to offer, but there is a lot more to see. A quick ride will take you another fantastic experience, this time, a hands-on one. Avanos, known for its pottery art since Hittites, is one of the most beautiful towns in the region, and literally, it is the first settlement of the human being. The longest river of Turkey, the Red River, passing through the town, gave the locals the chance to collect the beautiful terra-cotta soil and make their pottery since the early centuries. While it had been the leading economic source of the town, today, it remains a touristy visit at many workshops, but again, we have some of the best on the list.

Time to check-in to your hotel and enjoy the time for sunset from your hotel lounge or terrace with a delicate glass of Cappadocian wine.

We will be recommending restaurants for dinner at walking distance or with private transportation, which can also be combined with an impressive performance of Whirling Dervishes at a historical caravanserai.

Cappadocia is one of the best places in the world for enjoying a hot-air balloon ride, and with its unique landscape, it adds all the extra value to the activity. We do highly recommend to include this activity in your package as well.

Getting transferred back to your hotel, enjoy an excellent Turkish breakfast and then after check-out of the hotel, enjoy your first visit to one of the underground cities, ranging from 4 to 6 floors; those early civilizations benefited as shelters and storage purposes.

The rest of the day includes photo stops for Uchisar Castle and Goreme before another local lunch and get transferred to the airport for your flight back to Istanbul. Upon arrival, get welcomed at the airport and private transfer to your hotel.

Will I book my own domestic flights?

We do prefer to book domestic air tickets to plan these two days perfectly, but if you would like to book your own tickets, we are happy to guide you with the flight codes and alternative flight times as well.

Should I book pre/post tour accommodation?

All our itineraries are created to serve the most requested routes, and they are all flexible. You can ask for pre/post tours, accommodation, and any other travel services to make the planning even better. So, if you would like to visit Cappadocia daily or extend this package to 3 days, it is all doable.

We arranged our own transportation. What shall we do next?

If you are arriving from other locations by bus or a rental car, we will then customize the tour accordingly and revise the rate. Click here to learn how to get to Cappadocia from Istanbul.

What is the earliest flight we can get after the balloon ride?

If you are catching a tight connection, an international flight, or you need to rush back to the cruise port, it is better to check the timings of the hot-air balloon ride activity before booking. The earliest flight, at no risk, would be leaving at around 10:00. However, this will vary depending on the season, weather conditions, etc. So, it is best to check while booking. 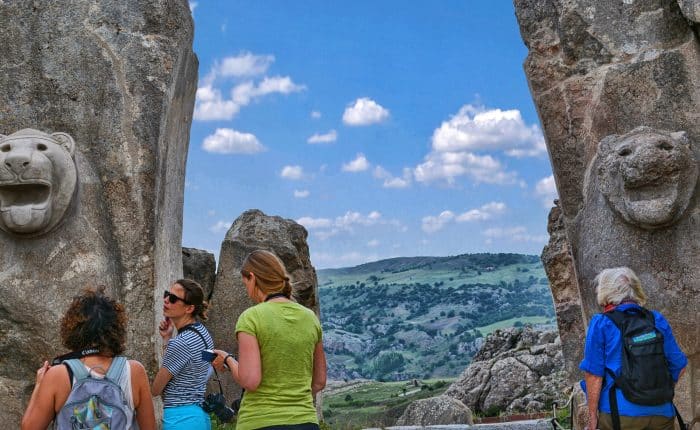 Hattusa Tour from Ankara or Cappadocia