When you book with an account, you will be able to track your payment status, track the confirmation and you can also rate the tour after you finished the tour.
Sign Up
19

Pamukkale is one of the most breathtaking destinations in the world. The name, which is Turkish for “cotton castle,” derives from the white stepped pools formed by calcium solidifying on the side of a hill. Right next to Pamukkale is the ancient ruins of Hierapolis, rich in ancient Greek history.

Even in ancient times, this area was a holiday destination. The city Hierapolis was founded as a thermal spa city where the Greek elite would visit to blow off steam from as early as 2000 BCE. Even after the destruction and abandonment of Hierapolis many centuries later, this region remains one of the most scenic places in the world.

Its beauty and historical significance have even earned the region a place among the UNESCO World Heritage Sites. In addition to being an exceptionally aesthetically-pleasing destination, swimming in the thermal waters of the area has health benefits.

The Pamukkale Hierapolis region is a prime sample of human-made wonders combining with natural beauty to form the most thrilling sights. Start your day in the ruins of Hierapolis and get ready for lots of history as you learn about life in the ancient Greek city. Finish your day as you cool off in the pools while your mind gets blown away by the region’s ageless beauty.

Explore the spectacular ruins in and around the beautiful ancient thermal city of Hierapolis.

Hotel pickups will start early on the set date of your booked tour of Pamukkale. At around mid-morning hours, your tour of this breathtaking region will begin.

Your tour will start in the ancient ruins of Hierapolis (If summer). These ruins have some of the best-preserved amusement destinations from as early as the 2nd century, and the ancient city is even said to have been one of Cleopatra’s favorite retreats.

Here are some of the places you’ll explore as you walk the streets of Hierapolis:

The theatre of Hierapolis, dated back to the 2nd century, was used to host live entertainment shows in the ancient city. The auditorium had forty-five rows of seats and could hold around 10,000 people during music and religious ceremonies.

Walk up the steps of this magnificent structure and have a seat anywhere in the auditorium as you try to envision the experience of a Greco-Roman audience getting entertained by an electrifying performance in the theatre.

The Agora is an open marketplace inside the ancient city of Hierapolis, where most residents would come to shop or trade with travelers. Local public assemblies were also held in the Agora to discuss various issues.

The Necropolis (translates to the “city of the dead” in Greek) is an ancient cemetery outside the Hierapolis. This cemetery has different types of graves from the ancient Hellenistic, Roman, and Eastern Roman periods. Walk among the dead as you identify the different kinds of graves, including the Tumulus graves, Public graves for the ordinary fork, Family type graves, and the Sarcophagus for the upper-class dead.

The Cleopatra antique pool is another magical spot of warm and clear water, just above the Pamukkale white travertine pools. Here, you can immerse yourself in the same waters as Cleopatra did over 20 centuries ago. Enjoy the warm waters and the surrounding beauty that captured the heart of the famous ruler. In ancient times, the pool was surmounted by a Roman Temple dedicated to Apollo. The Temple has long collapsed, and now you get to swim around the fallen columns of this ancient Temple. The pool is run professionally as a modern Spa facility and is not included in the general charges of the tour. Swimming in the pool will be at your own expense.

3.The White Steeped Pools of Pamukkale

Once your tour of the ancient city is over, head off to the pools that have what is easily one of the most fantastic sceneries in the world. The warm pools in brilliant white travertine terraces are a sight to behold. Here, you walk in the warm waters as the guard explains more about the geography behind the pools.

After a day of exploring the ruins and swimming in the thermal waters, you will be taken back to your hotel.

The Karahayit Springs is situated about five kilometers from Pamukkale. Unlike the white waters of Pamukkale pools and the clear waters of Cleopatra pool, waters at Karahayit are red. These waters are rich in a combination of minerals: Magnesium, Calcium, and Sulphur. As a result, they are said to have the ability to heal a wide range of illnesses. Swim in these relaxing hot waters, which have a temperature of about 56°C (132.8°F), while experiencing their legendary healing capabilities.

Paragliding and Hot-air Ballooning over Pamukkale?

Apart from walking in the thermal pools and strolling the streets of an ancient Greek city, there are other fun ways to explore the beauty of this region. The area already looks magnificent from the ground; imagine having a bird’s eye view of Pamukkale and Hierapolis from the Sky? Here come paragliding and hot air ballooning. Nonetheless, these must be booked in advance of your tour.

If you’re a thrill-seeker, you have to try paragliding before the end of your tour. Don’t worry about your skills with the parachute, paragliding in Pamukkale is a safe and simple affair, even for beginners. All the steering will be done by a professional pilot who will accompany you on your flight (Tandem Paragliding). Yours is to admire and soak up the scenery as you glide above the white travertines and ruins. A session lasts a minimum of 30 minutes, while others last up to 1 hour 30 minutes.

Paragliding isn’t the only way to admire Pamukkale and Hierapolis from the sky; taking a hot air balloon is also an option. Hot air balloons are an exhilarating way to explore the region from above. Enjoy the soft breeze against your skin as you slowly fly above this beautiful region. You can even close your eyes and embrace the sun’s warmth without having to worry about missing a sight. Short sessions will last about 35 minutes, while the longer ones will last up to 3 hours. 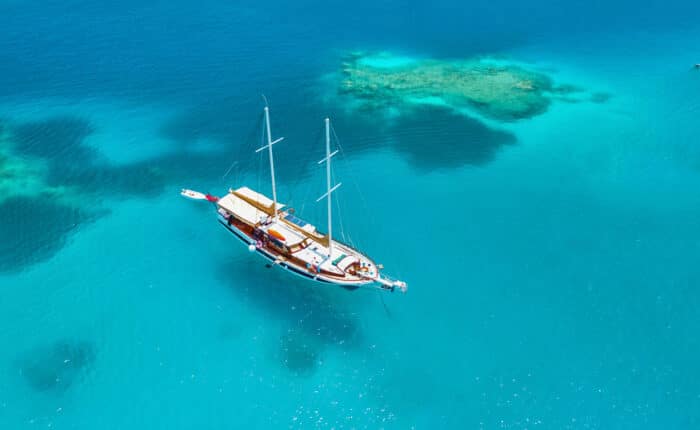