Cappadocia is a land famous for its distinctive rock formation, historical heritage, and scenic hot air balloon trips. Sitting in Central Anatolia, this historical region attracts crowds of tourists from all over the world. The area is such a popular destination that in 2019, it drew a total of 3.8 million foreign tourists.

So, if you are planning to be one of the millions of visitors that will tour this magical land this year, here are ten interesting facts you might want to know about the place. 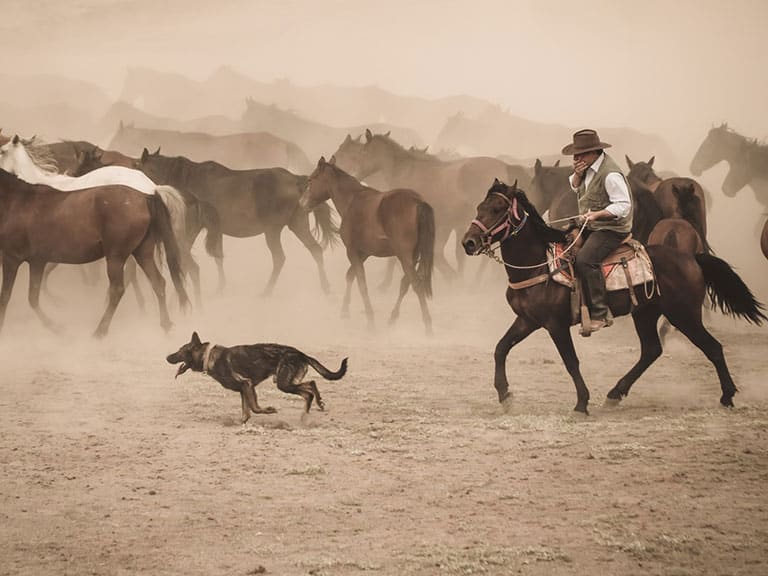 1. The Made-up Name Comes in from the Cold

Whereas Cappadocia is famous today for its otherworldly topography and a strong connection to the past, the region was known for something else altogether in ancient times; horses. Even the name itself, Cappadocia, is derived from the Persian word “Katpatuka”, meaning the land of beautiful horses. Ancient sources mention gifts or tributes of horses from the region presented to ancient Assyrian and Persian kings.

When Cappadocia was under Persian governance, horses were part of the taxes paid. The locals today still value horses, which sometimes offer visitors an alternative mode of transport.

Nevertheless, there is no officially approved written sources supporting this as the main source of the “Kapadokya” name. 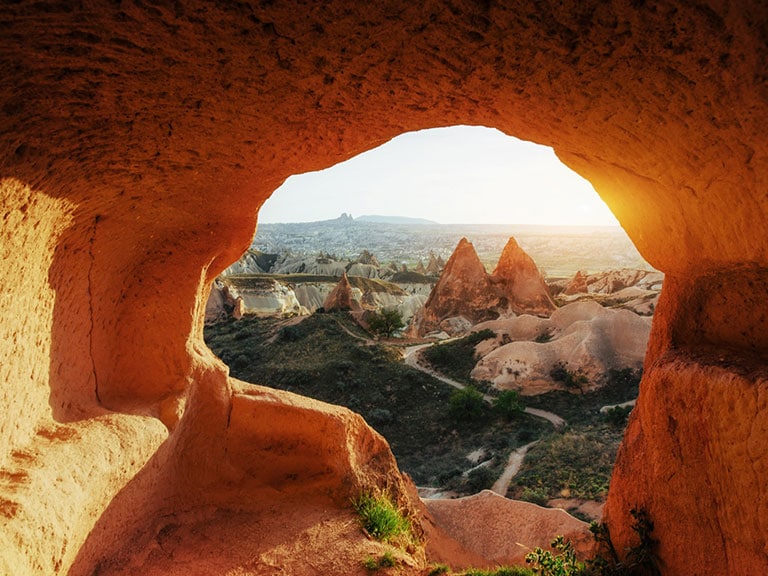 2. Rock Formations and the Landscape

The Cappadocian region was formed during the tertiary period around 60 million years ago after a sequence of volcanic eruptions hit Central Anatolia. The eruptions formed what is known today as the fairy chimneys and many others. The famous stunning landscape of Cappadocia was formed by volcanic erosion.

Volcanic eruptions that formed Cappadocia rained ash across the region. With time, the ash hardened into the tuff, which was covered by basalt. Tuff, soft and porous, wore down as the millennia passed, forming pillars up to 130 feet high. Basalt is harder and erodes slowly; therefore, it created a mushroom-shaped cap over each pillar. The results of this million years process are the iconic fairy chimneys of Cappadocia. 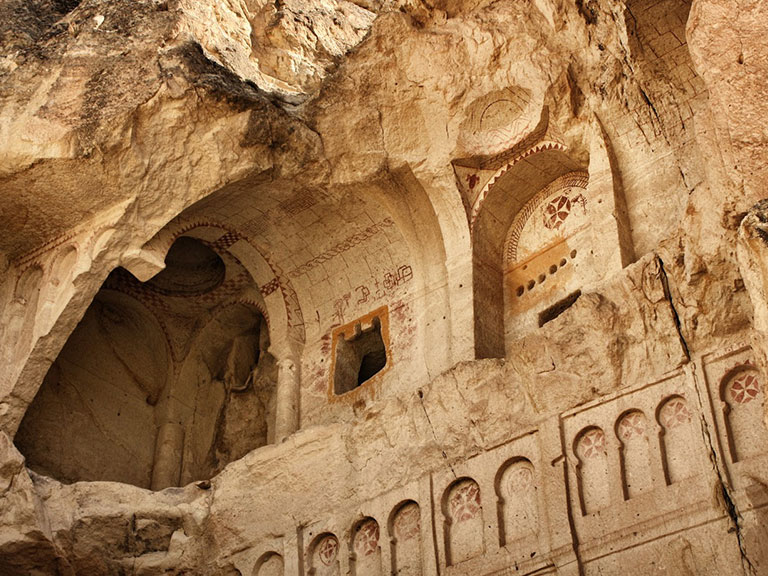 Cappadocia has had human settlers since the Paleolithic Era. Between 2500 to 2000 BCE, the Hatti culture called this region home and was closely followed by the Hittites, who settled here around 2000 BCE. The Assyrians also established trading posts in Cappadocia at around the same time. From 1250 BCE, the region has changed rulers from Phrygians and Persians to the Romans in 17 CE. In medieval times, the area was home to Christian communities and people escaping religious persecution, and thus, the inhabitants led a monastic way of life for a thousand years. 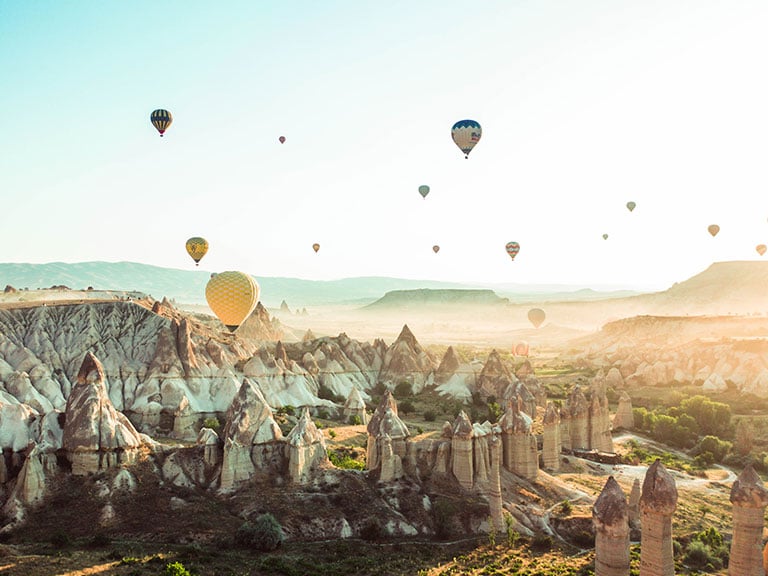 It’s no doubt that Cappadocia looks great, and exploring the area exposes some stunning sights. Nonetheless, for the best view of the region in all its glory, take a hot air balloon flight across the Cappadocian skies. From the air, the region’s moonscape topography offers one of the most unforgettable sights.

It is no wonder that hot air ballooning in Cappadocia attracts up to more than a million tourists annually. Over 100 hot air balloons take to the skies during the morning, which is spectacular scenery. Therefore, if you want to enjoy the most scenic views of the rock-cut churches and fairy chimneys, a hot air balloon flight is a no-brainer. 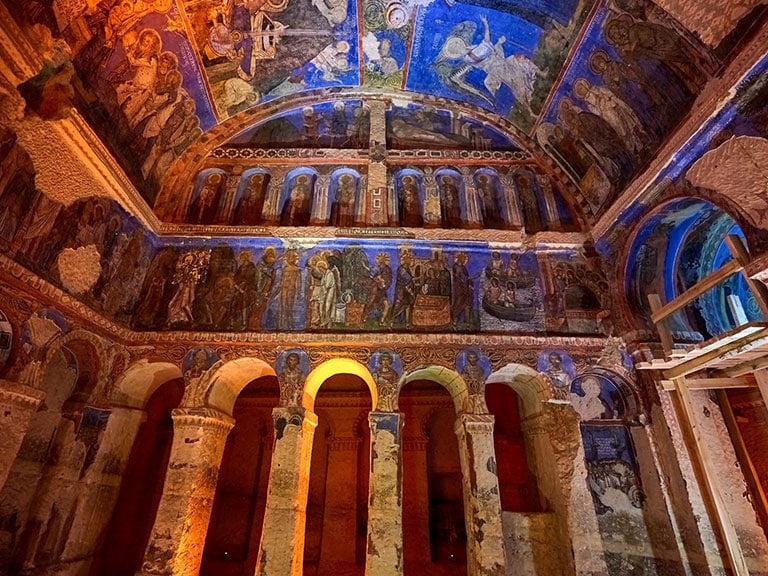 Cappadocia is also famous for its strong historical connection to medieval times, as shown by the rock-cut churches scattered across the land. These churches number up to 600, and there is a possibility that many more are yet to be discovered. The chapels were carved into the soft Cappadocian rock by monks in the dark ages, and some of them retain their original impressive frescoes with amazing detail.

Nonetheless, some of the paintings have been damaged by extensive erosion and superstitious locals who scratched out the eyes of some of the figures due to fear of the Evil Eye. The most visited churches are found in Goreme Open Air Museum, while others are in Zelve, Rose Valley, and Red Valley. 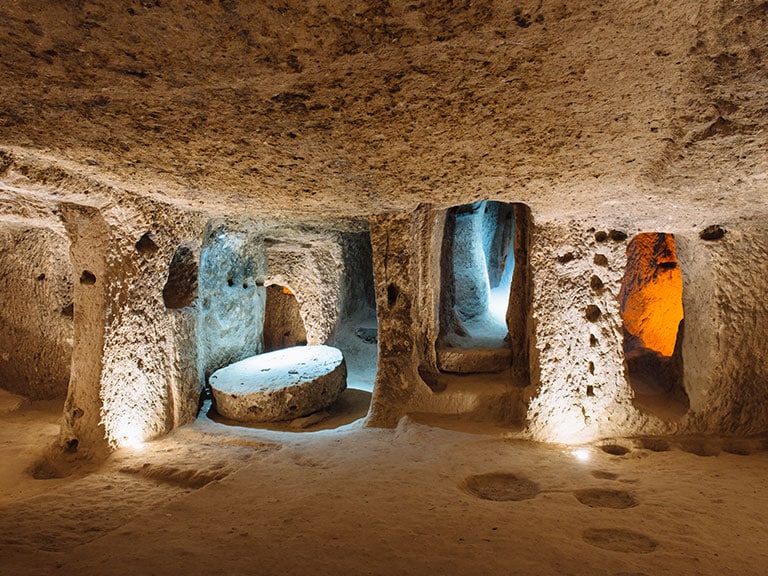 Hidden beneath Cappadocia’s exquisite landscape are over 50 underground cities. These subterranean towns were carved into the soft volcanic rock thousands of years ago and have hosted different inhabitants over the years. Some of them extend up to eight levels into the earth. An interesting fact about these cities is that they contained all the necessary facilities to lead an everyday life.

These cities had everything a typical town would have, from wine presses to cooking places, oil storage, and livestock pens. The underground cities served as a haven for Christians escaping persecution by Arabs. There are underground cities at Ozkonak, Mazikoy, Kaymakli, Derinkuyu, and several other places. 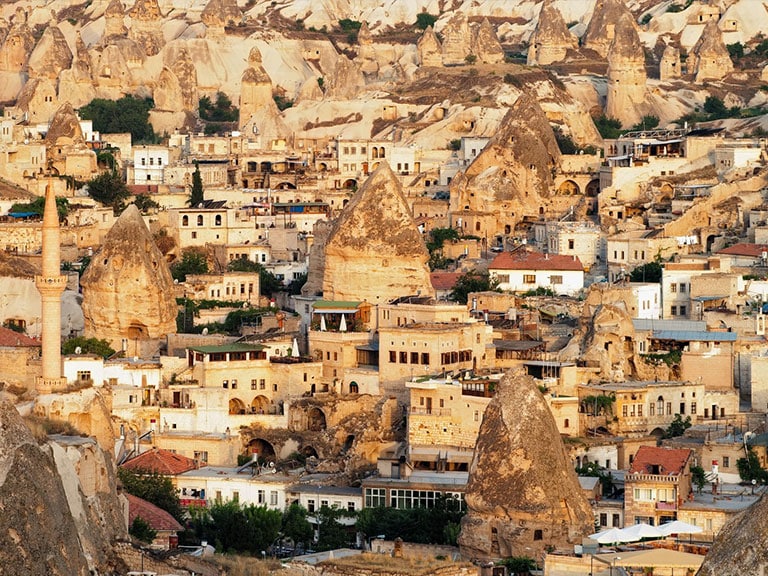 The village of Goreme is one of the few settlements in Cappadocia that is still inhabited to date and serves as the area’s main tourist center. The town has had a total of three names throughout its history. When it was established, the town was called Avcilar, which means hunters. Later on, it was called Maccan before arriving at its current name, Goreme.

The name Goreme means “one cannot see in here,” which refers to the way Christians hid in the area from Arabs during the invasion. The retreating Christians found hiding places in the many underground cities of the area. 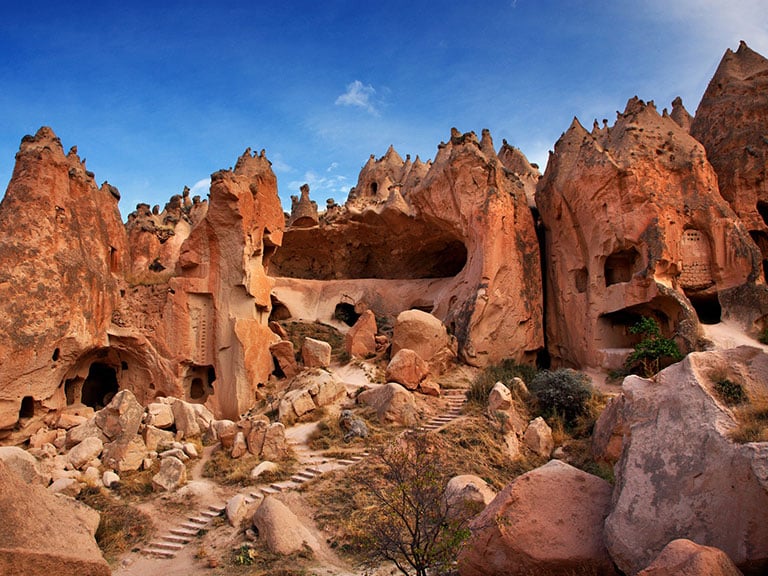 Due to the massive impact, that man has had on Cappadocia’s landscape, certain sections of the region are UNESCO world heritage sites. These include the Goreme Open Air Museum, which is the most visited section of Cappadocia. The museum, rock sites of Cappadocia, and the adjacent Aktepe were declared UNESCO World Heritage Sites in 1985.

All of the mentioned sites are places of outstanding universal value since they provide evidence of Byzantine art and are home to the remains of an ancient human habitat that dates back to the 4th century. 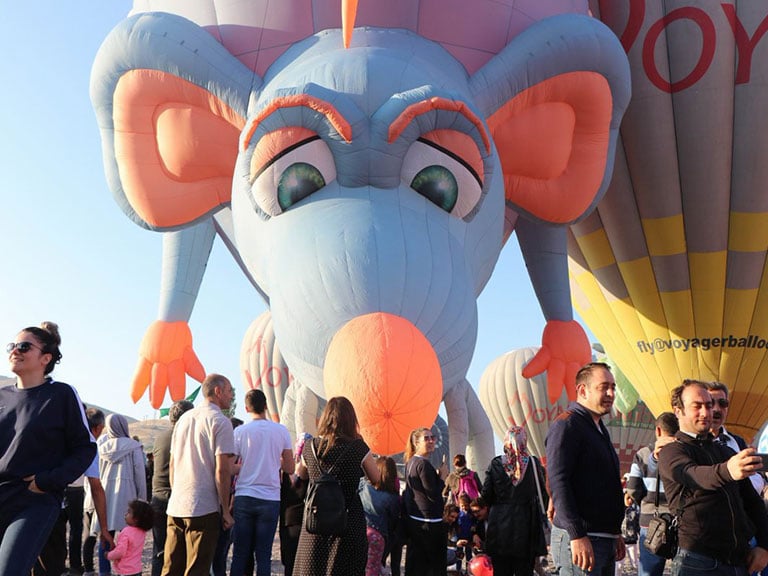 Cappadocia not only treats visitors to a magical landscape; it also lets them make merry through various festivals at certain times of the year. These festivals include:

Due to the volcanic tuff, this region is a large grape producer with a long winemaking history. This tradition makes Cappadocia a favorite destination for wine lovers. Notable wineries in the area include Kocabag, Turasan, Kapadokya, and Senol, and each of these produces a variety of wine types. The region is the source of popular red wine brands and white wine that visitors can sample in the many wine tasting shops.

Come and Learn More Facts About Cappadocia for Yourself

Planning a trip to Cappadocia soon? Then, check this guide to learn more about this region, and let us show you around the way you desire.