When you book with an account, you will be able to track your payment status, track the confirmation and you can also rate the tour after you finished the tour.
Sign Up
274

Experience centuries of Greek and Roman history when you step into the magnificent remains of Pergamon. The ruins of the outstanding capital sit 16 miles (26km) from the coastline of the Aegean Sea and were declared a UNESCO World Heritage Site in 2014.

A tour of Pergamon lets you explore one of the most important cities of the Hellenistic and Roman periods. And even though much of excavated structures from the Acropolis sit in the Berlin Museum, whatever remains of the glorious city is of great historical significance and still worth visiting.

The ruins provide the perfect setting to let your imagination run wild and experience how life moved in an ancient Greek city.

Pergamon is a testimony to the unique and integrated aesthetic achievement of the civilizations.

The city of Pergamon was first mentioned in literary sources in Xenophon’s Anabasis. It is described as the place where the march of the Ten Thousand under Xenophon ended in 399 BCE. However, archeological finds suggest that settlement in the region may have begun as early as the late 8th century BCE.

The next mention of the city came more than 75 years later, a few years after Alexander the Great had ended Persian dominance in the region. After he died in 323 BCE, one of his generals- Lysimachus- took control of Pergamon and the rest of western Asia Minor.

From 263-133 BC, Pergamon was ruled by the Attalid kings, ushering in a new era of prosperity. The dynasty strengthened the kingdom, with one of their most significant achievements being the defeat of the Gauls in 230 BC. They also decorated the citadel of Pergamon with white marble structures, a beautiful feature that still attracts visitors to date.

In 133 BC, the last Attalid king, Attalus III, bequeathed the whole kingdom to Rome. Whatever little apprising arose against the decision was squashed by 129 BC, with the city becoming the capital of Asia minor for a brief period. Under the Romans, Pergamon continued to flourish, and by the 2nd century, it was one of the largest cities in the region.

However, the rise of the Byzantine period marked the beginning of the city’s decline. From the Late Antiquity onwards, the city was in a state of free fall, and by the 14th century, it had no inhabitants and was in complete disarray.

Today, the site forms one of the most important historical attractions in the region.

The Ancient Site of Pergamum

Rolling across a hillside, the Acropolis at Pergamon is just as visually stunning as it is historically significant, providing you with so much to see and do during a visit.

Perhaps the most impressive highlight of the site is the theater built into the hillside. This 15,000-seat structure is not only the steepest Hellenistic theater in the world but also had some of the best acoustics- an audience sitting at the top row could hear even whispers of the actors in the orchestra.

North of the theater is the ruins of the temple of Athena. As you walk towards them, pass through Pergamon’s famous library. This 170 BC structure once housed the largest volume of books and manuscripts- containing at least 200,000 scrolls- in the ancient world, the second largest in the ancient Greek world after the Library of Alexandria. The library’s collection was later taken to Alexandria by Mark Antony and gifted to Cleopatra.

West of the impressive library lies the Temple of Trajan. Marvel at its beautiful marble columns and proceed to the bottom of the theatre for a glimpse of the Altar of Zeus, or at least what remains of it.

Another impressive structure around Pergamon is the Asclepion area. This ancient spa was established in the 4th century BCE and thrived as a significant healing center during the Roman period in the 2nd century. Treatment methods involved mud baths, drinking holy water, medicinal herbs, exercises, thirsty cures, and walking barefoot in the snow.

Built nearly 2000 years ago, this massive red-brick structure started as a temple dedicated to the Egyptian gods; Isis and Serapis. Then, in the Byzantine era, it was converted into a church dedicated to Apostle John and, later on, a mosque in one of the towers.

How far is Pergamon from Ephesus? 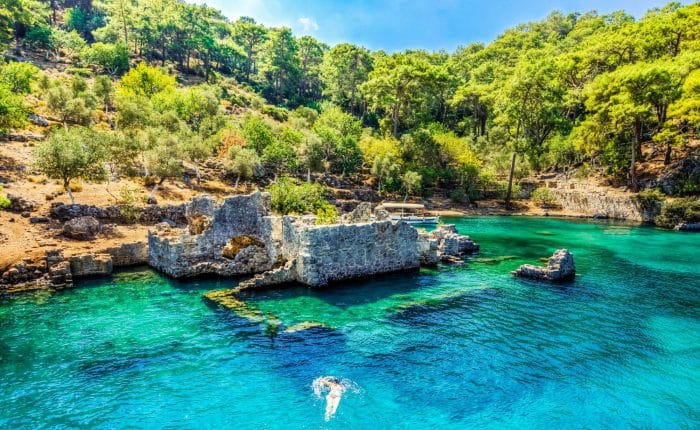