The Trojan War is one of the most important narratives in Greek mythology. Thanks to Homer’s Iliad, most people have at least heard of the Trojan War. And they mostly know about the notorious Trojan Horse.

Described in such great detail, it’s easy to understand why so many early historians believed it to be true. But did the Trojan War actually happen? Or is it just a well-told story?

Continue reading, and we’ll walk you through the origins of this epic tale and if it is indeed fact or fiction.

What Is the Trojan War?

The Trojan War was a decade-long war started by the Achaeans (Greeks) against the city of Troy. They sought war after Helen, queen of Sparta, was taken away from her husband Menelaus, the king of Sparta, by Paris of Troy.

This war has been documented in a number of works of Greek literature. It also makes up the core of Homer’s Iliad. Homer’s Odyssey follows the journey home of one of the Trojan War’s heroes, Odysseus.

After Menelaus demanded that his wife be returned to Sparta, the Trojans refused to do so. Full of anger, Menelaus got his brother, Agamemnon, to build an army and have them fight against Troy.

Ships were then gathered. They were led by some of ancient Greece’s most notable warriors, including Ajax, Odysseus, Patroclus, Nestor, Diomedes, and Achilles. Agamemnon then sacrificed Iphigenia, his daughter, to Artemis so that he would have favorable winds for his fleet.

Over the following nine years, the Greeks destroyed Troy’s surrounding landscapes and cities. However, Troy was so well protected that it could not be taken down.

As a final attempt to penetrate the citadel, the Greeks built the Trojan Horse. This horse was made out of hollow wood and carried a small number of soldiers inside it.

The Greeks who weren’t in the horse made it seem like they were sailing home, leaving the horse behind as a gift. The Trojans then debated if they should accept the gift, burn it, or roll it down the hillside. Eventually, they decided to bring the horse into their city.

That night, the soldiers jumped out of the horse and killed the guards. The other Greek soldiers were then able to sneak into the city easily. The gods were extremely interested in the war and took sides, trying to influence the winner.

The final year of the war is what makes up a good portion of Homer’s Iliad.

What the Greeks Thought

However, by the 1800s, most people believed that the war, as well as the city, were not real. But by the mid-1860s, excavations by archeologists gave the impression that Troy did, in fact, exist in the area now known as Hisarlik in Turkey.

So does this mean the Trojan War actually happened? Let’s find out below.

The Trojan War is instrumental to Greek mythology. And its importance helps to show why Greeks were so willing to believe it was more than historical fiction. Still, plenty of classical Greeks believed that Homer’s epic poems had likely exaggerated what really happened to make the war seem more dramatic.

For example, Homer writes that the Greeks sent over 1,100 ships to Troy. This seems like much too high of a number, and Greek historians assumed that to be the case.

But if we were to start our search for the truth with Homer’s Iliad, we would see that the war between the Trojans and the Greeks lasted for ten years and took place during the Late Bronze Age. After Paris and Helen eloped, the Greeks wanted to punish the Trojans to get Helen back.

The Greeks eventually won the war during what is known as the Sack of Troy.

The story was so compelling that even the most respected ancient Greek historians believed that the war had actually happened. Herodotus, affectionately known as the “Father of History”, was alive during the latter half of the 5th century BCE. He believed that not only did the war actually happen, but he dated it 800 years before the time he was living in.

The ancient Greek mathematician, Eratosthenes, was much more specific and claimed that the Trojan War took place around 1184 BCE.

The ancient Romans also bought into the story of the Trojan War. They went so far as to claim that they were the descendants of the Trojans who survived. The ancient Roman poet, Virgil, wrote that one heroic Trojan escaped with followers out of Troy and started a new community in Italy.

Modern historians and scholars have been a lot more skeptical.

Part of the reason why people were so quick to believe this ancient tale is the specificity with which Homer detailed the war. For example, when a warrior dies, Homer describes how the fish and eels ate him up in the sea. He also describes the city of Troy so vividly that it’s hard to believe any of it is made up.

Heinrich Schliemann, a Prussian businessman, was so taken by Homer’s words that he wanted to find the city of Troy himself. He traveled to Turkey in the mid-1800s. There, locals told him that they believed Troy once stood on the west coast of modern Turkey in the area of Hisarlik.

Heinrich rushed to the area and started to dig. Believe it or not, he actually discovered a variety of ancient Greek treasures. Many of those artifacts currently reside in the British Museum.

Schliemann was under the impression that these artifacts were from the Late Bronze Age, just like Homer said. However, experts dated these artifacts as having originated centuries before that era. Either way, the prevailing belief now was that Troy was indeed a real place, and it could be found in Hisarlik.

As more archeologists came to the site, they found that there was evidence of fire as well as arrowheads. These findings did, in fact, match the time that Homer claimed the Trojan war had happened. And the arrowhead could mean that there was a war.

Homer might have been telling the truth all along. Even more impressive, archeologists also found inscriptions that were created by the Hittites. The Hittites were from ancient times and lived in central Turkey.

And what were there inscriptions about? Why, a dispute over the city of Troy, of course. They, however, referred to Troy as Wilusa.

None of this proves for the fact that the Trojan War existed. Especially in the way that the ancient Greeks described it. However, for those people who want to believe that there was a significant conflict, these clues add fuel to that fire. 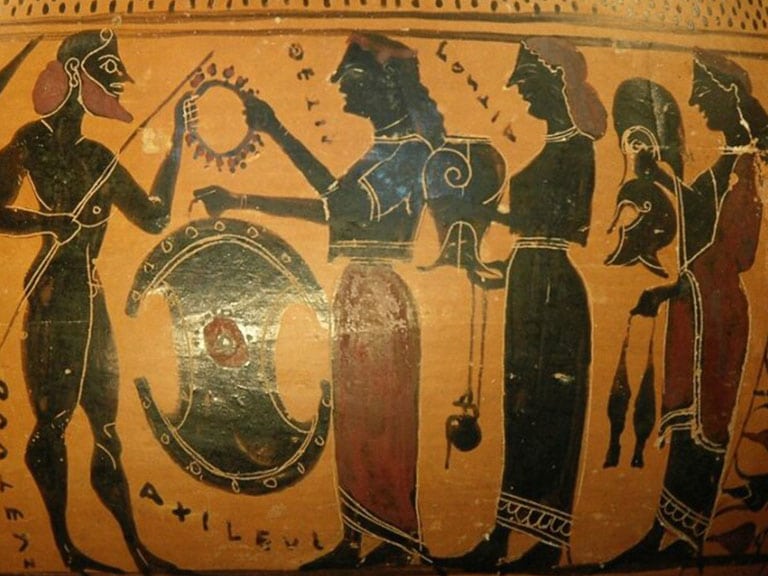 If a Trojan War did happen, it was likely a lot different than the one that Homer describes in his epic poems. It’s hard to imagine that there was a war on that scale, with thousands of ships and even more soldiers, and lasting as long as a decade, notably after archeologists concluded just how compact the citadel must have been.

With all that said, the behaviors of the soldiers and descriptions of the city are seemingly all too real in the Iliad.

The real beauty of Homer’s talent, one may argue, is his ability to take something as horrific and common as warfare and turn it into a gripping and beautiful tale to be appreciated thousands of years later.

If there had really been a Trojan War, there likely were no gods interfering with what was happening down on the battlefield. But soldiers who were surrounded by death and horror may very well felt that there was an otherworldly presence there with them.

From the tales of the Trojan War, the Greeks were able to better explain the cruel and challenging world they felt they so often inhabited.

So did the Trojan War actually happen? As we can see, history can be a funny thing to decipher. When you start believing one thing, another clue pops up that supports a different theory.

We can safely assume that Troy did exist. And there may have been one not so incredibly different from the one described by Homer. However, we’re going to need more research before we can definitely say if the war happened one way or another.

Interested in learning more about the ancient city of Troy? Contact us today to book your private tour with an expert guide, and you will be thrilled to know all the story behind this ancient site!